This morning, I crammed myself onto the 1 train to Canal, and I somehow got wedged in one of those horrible spots that’s an awkward distance from any handrail. It’s happened to me before on subway commutes, but this time was different.

No matter how many times I shimmied to the right or left or attempted to inch my way closer to a handrail when people shuffled in and out of the car, I could not grab onto anything — unless I wanted to put my hand on top of someone else’s (and I definitely did not have enough hand sanitizer in the world for that). In retrospect, the whole situation was kind of funny, but in the moment, I just didn’t want to fall on anyone (or vice-versa).

So, there I was — handrail-less in no-man’s land (except it was more like every-man-in-NYC-on-this-car-land), and all I could do was plant my feet on the ground and curl my toes against my sandals in hopes of swaying a little less dramatically each time the train halted to a stop. Miraculously, though, I didn’t fall (probably because I was sandwiched in by other passengers and cushioned by their tote bags and backpacks). To some, this was just a daily commute occurrence — but for me, the moment was a reminder to myself that even in city situations that are anything but easy or glamorous, I’m totally capable of (literally) standing my ground and making it work.

I’m in the middle of my third full week in New York City, and so far, I’m feeling happy with where I’m at with my internship experience and how I’ve been adjusting to living and working in this chaotic, hot, sometimes-smelly-but-a-lot-of-times-beautiful city.

I think the MTA is pretty straightforward to navigate, and I’ve actually enjoyed learning the different lines and figuring out which routes work best for me at certain times of the day. I no longer feel limited to only taking the same two or three lines, and transferring at 42 St./Times Square is no longer a foreign or daunting task.

I’d say I’m somewhere between a tourist and a completely confident local — I have a general idea of where I’m going and what lines to take, but I usually need to double (or triple) check before I leave. The other day, I accidentally hopped on an express train home. One minute, the train stopped at 59 St./Columbus Circle, and the next thing I knew, I was way too far uptown in Harlem. I should’ve taken a hint when two ladies scurried off the train at 59 St. and muttered something like, “It’s a loooong way ’til the next one.” Oops! 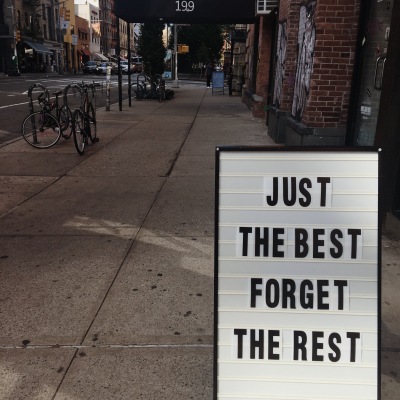 One of many charming signs in SoHo

“Did somebody eat an onion bagel?” (This is actually a whole wheat everything — but it’s the thought that counts) 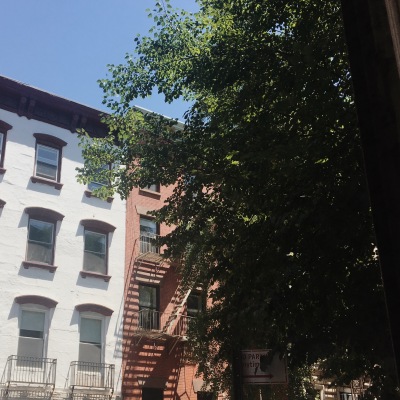 My camera roll = 200 building photos that look identical to this

Distractingly beautiful bookshelves at The Wing workspace in DUMBO, Brooklyn

Each day has brought its own adventures, experiences and lessons, and I’m thankful for all of it so far. It’s simultaneously amazing, inspiring, overwhelming and even humbling to be a tiny dot in this sea of millions — and to be surrounded by so much talent and knowledge and opportunity.

When people ask if living in the city is how I imagined it would be, it’s hard for me to say — because I always expected it would be different from the NYC I read about or watched in movies. What I do know is that being here really is a dream, and I’m eager to see what the rest of the summer will bring.

3 thoughts on “Everything bagels, express trains and other musings”