The past week has been a complete and utter whirlwind, but I wouldn’t have it any other way.

It has been a little over a week since the start of my study abroad program, and it has been amazing so far. Barcelona is even more beautiful than I imagined, and it is full of history and character. It is interesting to live in Barcelona rather than to stay here for a very short amount of time. Each day, I get more comfortable with navigating the city, the Metro, and being surrounded by the different culture.

In all honesty, prior to the trip, I was apprehensive about getting adjusted to a brand new place and balancing class work and my blogging project, but I have already learned a lot about prioritizing my time and working under deadlines. I am currently managing one blog and working on a blog for my Travel Reporting class, so I have my hands full with photography, writing and creating videos about my group’s adventures. (However, I couldn’t completely neglect The Darcy Diaries.) In just this short amount of time, I have learned to embrace my role as a travel reporter; I love taking my camera everywhere I go, jotting down notes and plugging my camera into my laptop at the end of the day to sort through the photos and video clips.

Here are a few updates about my trip/life in Spain thus far!

Flying through the night

The plane ride from Miami to Barcelona was a little over 8 hours. I slept for 2 hours. Going through the Customs line, I honestly did not feel half bad (probably due to the excitement and anticipation). One thing I remember noticing was how eerily quiet the Barcelona airport was at about 9 am. I expected to see passengers bustling around, but even the arrivals area, which was filled with people, was hushed. This was also the first time I noticed signs and announcements were in Catalan, then Spanish, and only sometimes in English.

The lack of sleep hit hard later that day when I was sitting with my group in a hotel lobby waiting to get my Metro pass and apartment keys. Our group leaders begged us to avoid sleeping until later that night, but I physically could not keep my eyes open. Apparently, at one point, I decided to sit on the floor and take a 20-minute power nap with my head on my duffel bag. Jet lag: it happens to the best of us.

Before heading to the airport, I had lunch at Pei Wei with my mom…and I got this weirdly relevant fortune.

Students on my trip are located throughout L’Eixample, a district in Barcelona. I am living in an apartment with five other girls. My apartment is in a mainly residential area and is only a few blocks from La Sagrada Familia, one of the most famous landmarks in the city. My roommates and I take the Metro to go anywhere else in the city outside of our own neighborhood.

On a “regular” day (even though there really is no such thing as a regular day here in Barcelona), I wake up at about 7 am, get ready for class and walk five minutes to the nearest Metro station with one of my roommates. In the morning, it usually takes 10-15 minutes (depending on how packed the Metro is – it can get pretty claustrophobic) to get to our school building from our apartment.

My roommates Olivia, Lauren, Amanda, Sydney and Corey are so much fun to live with. We each have our own quirks, but we balance each other out. I feel lucky to have such a positive living situation; it has made the study abroad transitions/challenges much easier. We look after each other, stick together and make sure nobody gets on the wrong Metro.

My roommates and I have gotten lost multiple times, but we usually end up laughing about it once we figure it out. Sydney and I got lost for 40 minutes on our first day of class after taking a wrong turn out of the Metro station – but we somehow still made it to class with ten minutes to spare. Also, on one of the first days in Barcelona, Olivia, Lauren and I almost got on the Renfe (an actual train that transports passengers to other cities and countries in Europe) instead of the Metro. Yeah. That was almost really bad. 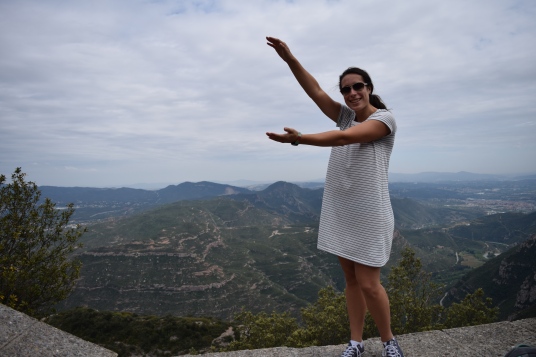 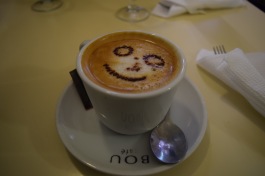 Lots of reasons to smile!

One of the many perros of Barcelona. 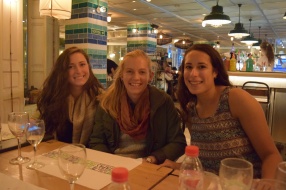 Posing with friends at the 1992 Olympic Park.

Tomorrow morning (Friday), my group is headed to Montpellier, France, for the weekend! I will be posting more on the CJC Study Abroad blog.